Getting to Know Alaska’s King Salmon 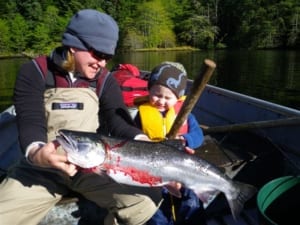 King salmon, also known as Chinook salmon, is easily one of the most recognizable and highly sought fish species in the Pacific Ocean. Although they can be found throughout the Pacific and as far away as Japan, there’s something to be said about the Alaskan king salmon and the Sitka fishing charters that chase them. One of the most overlooked facts about these salmonids is that they don’t limit themselves to the high seas, as they can live in various streams, rivers, and creeks throughout the “Last Frontier.” At Alaska’s Big Salmon Lodge, we focus on the ocean-dwelling varieties. And anyone who has come to Sitka for fishing will tell you to get ready to experience some of the highest catch rates in Southeast Alaska. Whether you decide on a guided outing or self-guided adventure, you’ll want to get to know the king salmon.

The largest of all Pacific variants, Chinook or king salmon, average 36 inches and typically exceed 30 pounds. You can tell adults from juveniles thanks to black irregular spotting on a full-grown specimen’s tail and dorsal fins. Kings also have a black pigment running up their gum line and is known as “blackmouth” salmon in some parts. Ocean-dwelling Chinooks are deep-bodied with a bluish-green hue that fades to a chrome coloration on the back. Adult males aged four to seven years old are discernable by the ridges on their backs and hooked snouts. On the other hand, females are distinguished by a narrow body, thick midriff, and flat noses. Although we target ocean salmon, freshwater estuaries are vital habitats for spawning king salmon and their young. Each female can deposit 3,000 to 14,000 eggs distributed across several beds, and most juveniles will remain in freshwater until the following spring. 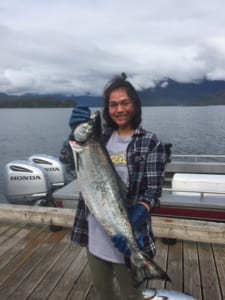 You should be ready to tackle several king salmon after gaining a few pieces of knowledge to add to your arsenal. But first, you have to start planning your Alaskan fishing vacation! Because of our unbelievable catch rates, Sitka fishing charters are highly sought after commodities, so you better act quickly before all the spots fill up! For more information or to make a reservation, please visit us online or call 907-290-7030.