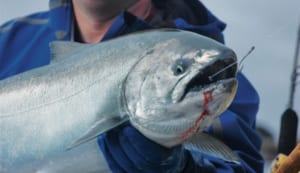 No other Sitka fishing lodges can match our prime coastline here on Middle Island. King salmon (or simply “Chinook” to the locals) is the largest species in the Pacific salmon genus, making them a highly sought after trophy fish. King salmon is delicious, for those who have never had the pleasure, because of their succulent, full-flavored, high-fat content meat. Visiting anglers will have the rare opportunity to reel in whoppers weighing in between 40 and 50 pounds (25-35 pounds is typical). Because of the massive number of baitfish in our waters, king salmon are teaming in our deep, cold coastline. King salmon stay in Sitka’s waters all summer long with May and June being the peak months. For those who are planning a self-guided fishing trip, trolling, jigging, and mooching are all foolproof techniques.

While silver salmon (also known as coho) are not nearly as large as kings, they’re one of the feistiest fish in the Pacific Ocean. Silver salmon are known for their acrobatic skill set, making them the “best pound-for-pound fighters in the salmon family.” They typically range from 8-12 pounds, but our anglers often arrive back at Alaska’s Big Salmon Lodge grinning from ear-to-ear holding 20 pounders. The silver season runs from early July typically through early October. We highly recommend silver salmon fishing in Alaska during August as they fiercely feed on local baitfish. Coho salmon taste best when poached or sliced thinly and breaded. 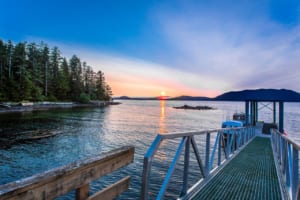 Alaska’s Big Salmon Lodge is a family-owned, full-service fishing resort that specializes in self-guided fishing trips, a rarity in the Last Frontier. Your stay with us includes deluxe lodging, fish processing, airport pickup, three meals daily, full days of fishing, and all tackle, bait, and gear. With self-guided fishing trips starting at just $1,195, you’ll want to give a call today at 1-907-290-7030 before we’re fully booked!